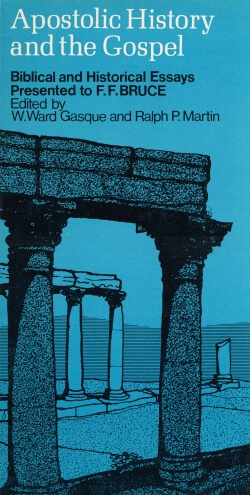 This festschrift in honour of Professor F. F. Bruce has contributions on Acts considered as an historical document, on the significance of the preface to Luke and the kerygma in Acts, on the journey-motif in Luke-Acts, with some archaeological observations on Paul's first missionary journey, on the resurrection in Acts, on some Semitisms in Acts, on the role of the Christian Prophet described in Acts, and on the connexion between ancient astrological geography and the list of those "out of every nation under heaven" who first heard the gospel on the day of Pentecost.

A further section of the book concentrates on Paul—his conversion, his Christology, his missionary preaching, his attitude to the Law, the part played by revelation and tradition, apostles before and after Paul's time—and also provides contributions on specific passages of Romans, Corinthians, Philippians, Timothy and on the Captivity Epistles generally. A third section discusses the Chi-Rho sign, its origin and significance, some "Acts" and "Epistles" in apocryphal literature, and comes down to the present in a consideration of the first chapter of Romans and the modern missionary movement.

This wide variety of contributions from scholars in three continents is now made available to the large circle of readers who will wish to join in birthday felicitations to Professor Bruce and to wish him many more happy and fruitful years.

The Acts of the Apostles as a Document of First Century History. E. M. Blaiklock

The Role of the Christian Prophet in Acts. E. Earle Ellis

The Preface to Luke and the Kerygma in Acts. A.J.B. Higgins

The Resurrection in the Acts of the Apostles. I. Howard Marshall

The Purpose of Acts: Schneckenburger Reconsidered. A. J. Mattill, Jr.

Semitisms in the Book of Acts. D. F. Payne.

A Comparison of Paul's Missionary Preaching and Preaching to the Church. William Barclay

The Conversion of Paul, and its Influence on his Understanding of Salvation by Faith. Jacques Dupont, O.S.B.

Paul and the Law—"All Things to All Men". H. L. Ellison

The Form, Meaning and Background of the Hymn Quoted in I Timothy 3 :16. Robert H. Gundry

Covenant and Communion in First Corinthians. A. R. Millard

The Theme of Romans. Leon Morris

Apostles Before and During Paul's Time. R. Schnackenburg

The First Chapter of the Epistle to the Romans and the Modern Missionary Movement. A. F. Walls.

Click here to...
This site and its resources are free to anyone who wants to use it, but it does cost money to run. If you have found it useful and would like to help keep it going please consider popping something in the tip jar. Thank you!